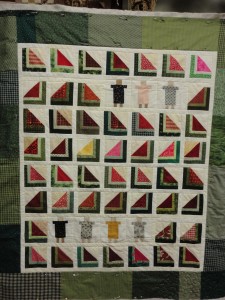 This watermelon quilt was the result of a block exchange in 2005. The blocks have been together forever, but I never quilted it. sycode custodia iphone x . custodia iphone 8 skull . until now. I think I figured out my problem. If anything is over 44″ wide, I set it aside, as I really don’t like piecing the back. Well, I just got over it. I split the fabric down the middle lengthwise and add whatever dimension I need plus a couple extra inches. I quilted everything in the ditch and did a large stipple around the border. I had so much trouble with that. I was using monofilament thread and was breaking needles every few stitches. I broke 4 needles in less than 15 minutes. It turns out my thread was caught on something and kept bending/breaking the needle. I was told the way to avoid that was to put the spool of thread on a spindle and have it feed off the top of the spool because of the way it was wrapped. It made all the difference in the world. I finished quilting around the rest of the border with no problem whatsoever once I had the thread feeding properly. I have attached the sleeve and a binding, now I just need to hand stitch it down. If you are counting, that is quilt number 3 DONE in the last week.